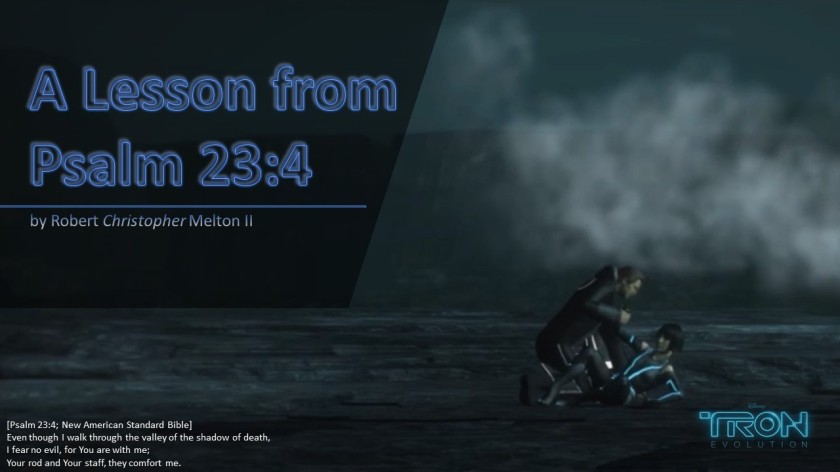 It’s Been A While

I attend a weekly Wednesday night Bible study named Third Place. One of the leaders of the study once told me that it was called that as a reminder of our own level of importance.

God should always be our first consideration in life with the needs of others before ourselves, leaving us in third place. With the second sentence as paragraph fodder, I can say that we had a verse-by-verse study on Psalm 23 in January 2020.

On the 22nd of January 2020, we studied verse four of the infamous Psalm. I was somewhat struck by the study. I recall that I had mentioned a few of my notes about how fear personally affects1 my own life and on the “rod or staff” question. It wasn’t until my father sent out an email later that week, however, that I really began to think about the lesson. Shortly after these both had an influence, I emailed my pastor requesting the lesson’s slides to serve as a reminder in order that my writing ideas would not be forgotten.

However, my Outlook inbox tells that it has been about four months since I received this email. I texted my dad about one of these two ideas and can somewhat piece together what the second may have been about but “it’s been a while.” Some of the more well thought out sections I initially wanted to include may not be recovered. Although, I’ll go ahead and run through these questions again as if they were the questions for tonight and that can hopefully jog my memory just a little bit for a short essay.

I didn’t find too much of a difference between translations besides the last part, “Your rod and Your staff, they comfort me.”2 Of course, King James and its “New” successor are going to use the archaic old English or Shakespearean language but all of my translations (NASB, NIV, KJV, NKJV, ESV, NLT) use this same general sentence structure.

The New Living Translation, which I’ve heard negative reviews about, is supposedly the only odd one out as it adds, “they protect and comfort me.”

I kept it to myself during the original study but the reason I’ve heard negative reviews about it is precisely illustrated here: they just add words. Perhaps this isn’t the best example as I suppose it could be defended that they were adding this words for the purpose of exposition but there are definitely more examples of this same issue elsewhere in the NLT’s translation. Regardless, this was a topic of discussion in our study back in January and I have trouble remembering if it bore any fruit.

Trying to answer all of these questions was a really good decision because this was a question that really got to me. I remember firmly suggesting finances. That’s the big one for me and I think it’s very relatable amongst the majority of Americans. I didn’t have too much input besides “money” for this question as I don’t fear3 a whole lot other than what has the potential to affect my quality of life. “Rejection” was another answer that really stuck out to me but the other three are lost to me. When it came time to answer, I was among those to be asked what I think people fear most.

To this, I prominently answered that finances are a general source of fear in my own life and that I think many people suffer from the fear of an insufficient financial status. I was careful to express that my trust and hope did and does not rest in something so perishable, but I fear it as a source of uncertainty. “What will I do if I can’t support myself financially?”

To my surprise, this was not the answer the Bible study teacher wanted as a way of moving forward with his lesson.

When we called on another attendee of the study group, I was taken aback when I heard the teacher extend on an answer relating to well-standing with others. It wasn’t necessarily “popularity” but I can’t remember the actual word used. A few days later while I was talking about how this study somehow related to his email, I told my dad about how puzzling I found this answer. My dad said that he, my sister and I aren’t that afraid of what other people think of us. At least, we’re not as affected by this fear as other people normally would be.

3) The Affect of Fear

Obviously, the correct answer to this question in a Bible study of the verse that reads, “I will fear no evil, for You are with me“ is, “I will fear not.” My fear of an inefficient financial status, for example, is kept to a minimum by the building up of a sufficient savings account. To those of you that say that I shouldn’t think about tomorrow for I know not what a day will bring (Ps 27:1; Ja 4:13-16), my savings account is coming especially in handy with the pandemic the country is currently facing with Coronavirus.4

To extend on this example, I am not too concerned about my financial status even now. First because I was prepared for a time just like this but mostly because I can trust that everything that happens is within the boundless parameters of God’s knowledge and control and I trust that He can and will protect me from anything that is not in His plan. (Ro 8:28) As for the answer the study group teacher was looking for, however, I cannot recall.

As I was busy thinking about why this question was not made with the anticipated answer involving finances, the finer details of his elaboration on social status slipped my mind.

I am reminded by others that were present that it involved the footnote that humans were made for relationships. When I wrote an message asking if this was correct and any other notes he had on the question, Third Place’s pastor wrote, “I did and do tell people all the time that we are made for a rich relationship with God AND others!” He also sent me a multitude Bible verses supporting the topic: John 13:34-35 and 15:12, Romans 13:8, 1 John 4:16, Proverbs 3:3, Ephesians 4:2, 1 Peter 4:8, Hebrews 10:24, 1 Corinthians 16:14. So to say, he’s well-versed on the subject.5

4) The Significance Behind the Rod or Staff

If I remember correctly, my group never got around to discussing the fourth question as we were too busy talking about the other questions. This is not terribly uncommon in our Bible studies. I never expect it to be perfectly honest but the questions asked usually invite discussion on surrounding topics. We’ll usually discuss those before moving on which usually ends in coming up one or two questions short. With this question unanswered, the teacher ended up picking a few people at random to answer on the spot.

When I was called to give my answer, my attention was directed at the effect of the rod/staff: “they protect and comfort me.”6 I informed the group that, though I don’t have the knowledge of an actual shepherd, I assume that the rod or staff would serve as a waypoint one could look back to in order to return to the shepherd. This assumption led me to conclude that the “rod or staff” exemplify the Holy Bible or His “Holy Temple” (Jonah 2:4). Even so, this assumption was likely incorrect as a discussion with my father a few days afterward revealed a perspective that would seem to be closer to the initial intent.

My father suggested that a shepherd uses his rod or staff to “herd” his sheep to where he would like them to go.  This made more sense. My improvised assumption as to the use of the shepherd’s staff might work in the metaphorical sense but definitely not in the literal. In the literal sense, sheep left on their own would likely wander so far as to not even be able to see the staff. Yet my dad’s suggestion works in both the literal and metaphorical. If I think of the staff used as a guide, I can recall many times when I’d wander from what God’s plan is and He’s graciously nudged me back on track.7

In the email I sent to my “20-something’s” pastor to request the slides under the first paragraph, I wrote that I originally intended on writing two separate posts on these ideas. The study on January 29th was spent thinking of a way to connect these two ideas like I thought I’d do here but I must’ve decided against that. Still, they really do seem like two completely different ideas when I read through the text I sent to my dad.

Besides, I’m sure my handful of readers have had enough reading for today anyway. This post turned out to be lot longer than I first thought it would be in fact. I wanted this to be a short “quick jot” post but decided to remove that tagline after the fourth footnote. Still, I enjoyed writing about my Bible study as it allows me to write about the biblical perspectives of, not only myself, but those around me. I think I’ll leave it at that and try to do this more often. Until next time then, stay awesome!

1I’m somewhat certain “affect” should be used in this situation whereas the Bible study slide below uses “effect” though I’ve been wrong before.
2 New American Standard Bible: 1995 update. (1995). (Ps 23:4). La Habra, CA: The Lockman Foundation.
3 The Bible study teacher actually reworded this question to list five sources of fear as a means of staying relevant to the verse.
4 The image was taken from a series of Screen Rants “pitch meeting” videos, you will find these pitch meetings (and, occasionally, the comedic emphasis on the word “all”) here.
5 Ah! See what I did there? Also, here‘s a page that lists all the other aforementioned Bible verses if you weren’t able to successfully “hover” on tablet or mobile.
6 In the Holy Bible, italics will usually be used on words that were not in the original Hebrew/Greek text; though “protect” might be a word attributed to the original Greek text, I use italics here because it seems the majority of translations do not use this word.
7 See The Cake is a Lie, where I profoundly confess my rebellion against our God and the “nudge” at the very end to bring me back is literally a Bible word study.